She howled, her whole body going taught, and in the middle her howl became a very feminine scream.  Where the wolf had been was now his Sookie.  He looked at her father, kneeling on the other side of her and saw tears in his eyes.

“Thank you,” he said to the King of the Fae.

“It took us both to bring her back,” Niall told him.  Nodding, Eric picked her up, holding her close, kissing her forehead softly.  Niall thought he could see perhaps what Susanna saw in this vampire, at least a little.  He reached out and touched Eric, taking them all home in a blinding flash of light.

Eric was laid out on a chaise lounge in the high noon sun, his only protection his beautiful fairy lover and her magical blood. She had fallen asleep stretched out on top of him and was currently drooling a little on his chest.

It was absolutely the best feeling he had ever experienced.

They had come to his Jamaica compound after her transformation.  The last month had been nothing but sun bathing and love.  Sometimes, both at once, and those days, those beautiful priceless days were worth two thousand years of darkness to get here.

They would have been worth four thousand, but if no one was asking he wasn’t offering.  He gently rubbed her warm back, causing her to moan and snuggle into him more.  He smiled and kissed the top of her head.

Her memories of their time together had returned with her from wolf form, and he now had back the fearless brave woman who had asked him if it was all right that she wanted him.  The one who had offered herself to him, no guile, no intention other than loving him.

Getting Susanna back had been an impossible dream.

Getting Sookie back was more than he had ever let himself hope.

She could drool on him forever as long as she never left him again.

“I’m not drooling,” she mumbled into his chest, her hand coming up to wipe her mouth.

“Telepath, hello?” she was sounding more awake now and he chuckled at her sass.

“You were dreaming,” he told her, holding her tighter, trying to melt into her.

“Pffft! Eric Northman, you can’t lie to a telepath!”  She turned her head and resting her chin on his chest, batted her eyes at him, looking sleepy and serious, or maybe it was serious about being sleepy. Her cheek was pink where it had been resting against him as she napped in the sun.

“I would never try, Sookie.”

“Yes you would, but it’s only because you want to know if I’m paying attention.”

“And are you?” he asked, thinking about how they had made love before her nap, sending images of her beautiful expression as she rode him to completion in the bright Jamaican sun.

“Oh,” she said softly. “Yes,” she shifted in his lap.  “Definitely paying attention.”  She wriggled up his body and kissed him.  “I want to see if I can inspire that same look on your face.”

“I am confident that you can.”

They had been kissing for several minutes when the phone next to the lounge chair rang.  He reached for it, already knowing it was Godric, the new head of SIN calling to check in and see if they were ready to come back to work yet.

“Hello, Godric,” they said in unison, before Sookie went on to kiss his neck, leaving Eric to field questions from their new boss.

“Hello, Eric, Sookie!” came his cheery voice through the phone.  “I have a case for you.”

Sookie groaned in his neck, collapsing against him for a moment before blowing past it, and starting to blow in Eric’s ear.  He shivered in the sun, and ran his hand up her back, palm open, covering her in the way he knew she liked.  He was rewarded with a tug on his earlobe and renewed efforts to distract him from Godric and his new case.

“I doubt it,” she whispered in his ear.

“Stupid vampire ears,” she moved on kissing him, a little louder making her subtle point that Godric was intruding on their personal alone time.

“An industrious group of fairies have set up a strip club in Vegas and were doing quite well until the local vampire monarch sent his boys around to get a piece of the action.  Now we are on the edge of full blown supernatural war on the Strip.”

“Strip club,” Sookie huffed.  “Been there, done that.”

“No, you misunderstand, it’s a male strip club.” Sookie’s head popped up, the devil in her eyes.

“Yes, I thought Eric might go undercover with you as backup and infiltrate the club.”

“They’d let a vampire dance in their club?”

“Oh, yes.  Race war aside, they are all about the bottom line.  Once Eric struts his stuff, there is no way they would turn him down.”

“We’ll be there in three days,” Eric told him, getting ready to disconnect the call.

“Alcide has the details, I’ll let him know you’ll be in touch.” Eric set the phone down and turned back to Sookie who was still grinning.

“We need to practice,” she said, moving in for another kiss.

“You want me to dance for you, lover?”  She shivered in his arms, her eyes fluttering shut.

“I love it when you call me that,” she told him, kissing him passionately, her hands going around his neck, one tangling itself in his hair.  “Will you dance for me, Eric?”

“Any day.  Every day.  Forever,” he whispered against her lips, his hands resting on her bottom, pulling her against his hard length as he thrust up with this hips gently.

“I love you,” she told him, and he knew it was true, not only because he could feel it in their bond, he could feel it in her touch and hear it in her words. She shifted in his lap then, sliding his hard length into her body slowly, moaning her pleasure at feeling him buried deep inside her.  “Forever,” she said, looking deeply into his eyes as she started to move.

Thank you all for taking this journey with me.  I had a great time writing these characters and creating this world.  I like to think we may pop in and visit them again someday.  I am sure that with all the trouble out there in the in the human and supernatural worlds our SIN Agents will have many, many adventures before they hang up their spurs and retire to someplace where they can focus on what matters to them most…each other.

Continued in the One Shot Happy Valentine’s Day, Mr. Northman… 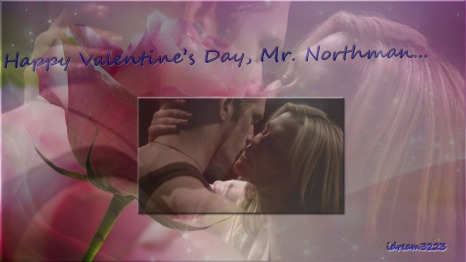