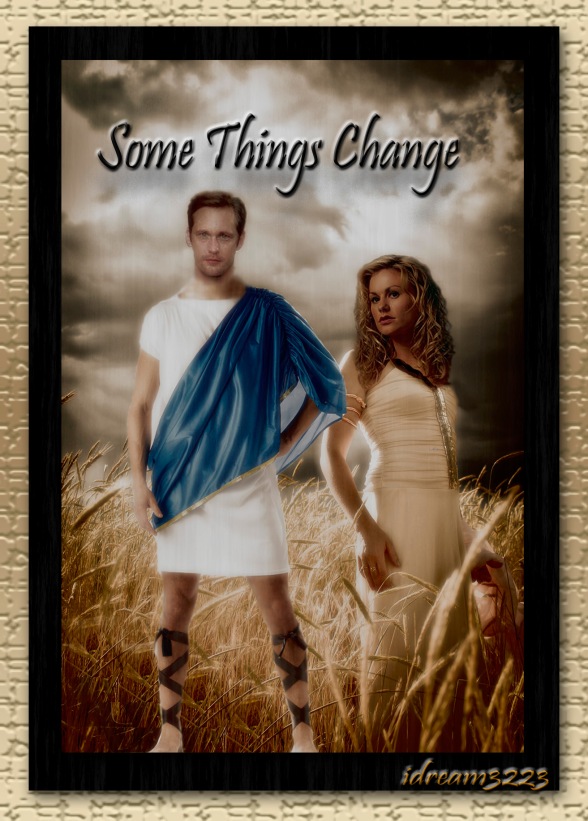 Eric sometimes spent his days on deck where the light was better to read by.  He was deep into the recounting of a spring fertility celebration that featured a show by the Bull Leapers when he found a photo of a fresco that had been uncovered in 1927 on a dig led by Sir Francis Athelby. The caption beneath it simply said, Female Bull Leaper, 1500BC.

His heart nearly stopped in his chest when he saw that it was his Sookie.

She was there.  She was alive in 1500BC. No, wait that meant that she was dead now after all.  Dead for almost 3500 years?  How could that be when he had just kissed her less than two months ago?  His mind struggled to rationalize and connect the impossible, to impose order over this madness that had become his life from the moment he had gotten the telegram telling him she was dead.

He looked at the fresco again, just to make sure that he had seen what he thought he had seen.  It still looked like Sookie.  But does that mean it is her?  No.  Yes.  Maybe?  He put his hands over his eyes and took some deep breaths.

I have to face the possibility that I am losing my mind.

It was a sobering thought at first and then after a moment it became a freeing one.  Sitting back, he folded her arms across his chest and leaned his head back in the sun.  Its warmth helped to center him and organize his thoughts.

Was it crazy to spend every last penny he had on a trip around the world for a woman he loved?  Not to me, the answer rose up from inside him.  Not for my Sookie.

Was it crazy to think that she had somehow been swept through time to some distant and ancient land where she waited now, still alive, waiting to for him to find her? And that somehow he would do that, he would find her?  Not to me, came the answer again.  Not for my Sookie.  From that unshakeable certainty more came from deep inside him.

When you committed to this path you told yourself that you couldn’t accept living the rest of your life and not knowing one way or the other.  So, if you can’t make it work in your head, then you need to let that go and focus on the finding out everything you can.  When this is done you will either have her in your arms or you will know that she is forever beyond your grasp be it in this world or some other.

A few deep breaths later he leaned his long frame back toward the table holding the book he now believed showed him Sookie in an ancient Minoan fresco.  After that any doubt he had about the truth of his sanity was squashed without mercy.  Part of moving forward was choosing a path and pressing on.  Turning in useless circles of doubt would do him no good now.

As Eric watched the shoreline of a foreign country come slowly closer it occurred to him for the first time that he had never left New York City before.  It was Sookie who had charged out to exotic places doing new and unusual things.  He had envied her, wanted to be with her since he was eleven, but as the shore came slowly closer he felt his anxiety rising.   Would he know what to do?  Would he know what to say?  In the dream she had told him to find the vampire at the ruins in Rhodes that she would help him.

The rational part of him that attributed this to being simply a dream believed that Sookie had said vampire because of all the Saturday afternoons he had spent at the movies.  He had confessed once to Sookie in the letters he never sent that he was drawn toward films like Nosferatu and Dracula.  He also liked The Mummy and Frankenstein.  Dr. Jekyll and Mr. Hyde reminded him a little too much of Appius for him to truly enjoy the film, but still he would have chosen it over most others of the day.

There was something about the supernatural world that drew him in and held him like no other.  He wondered if this was something that she would understand or if she would see him as childish in his film preferences.

The irrational part of his brain that had been driving since he robbed the library and boarded the ship for Greece believed that when he got to her dig site he would find the vampire that she had told him about, and that she would be able to help him. Whether she would or not was not clear.  If indeed vampires were real then his film research indicated that they would help if there is something in it for them.

He would just have to figure out how to spin the whole situation so that the vampire saw it as advantageous to not eat him, share whatever information there was to be had, and then to tell him how to travel back to where Sookie was.  He swallowed the lump in his throat.

After arriving in Greece it had taken him another seven days to reach Rhodes.  In the town he had been able to determine where the dig site had been and managed to arrange a ride out for first thing the next morning.

That night he dreamed again of Sookie.

She with a dark haired man and she was dressed in a manner that made what she had worn to his office seem sedate.  Eric knew from his studies that the preferred female dress in Crete 3500 years ago had been a full length skirt that flared out around the legs, and a girdle that hooked under the breasts leaving them exposed and prominently displayed.  Seeing Sookie like this made his ghostly flesh harden and then spurred him to move between Sookie and the strange man that was clearly appreciating the view very much.

Eric was facing Sookie and in doing so happened to look down.  Her nipples were hard and rouged a perfect pink that matched her bee stung lips.  His mouth went dry with the need to taste both.  It was a need second only in how much he wanted to protect her from the gaze of anyone but himself.

“King Minos,” Sookie began the tone gracious and pleasing as she danced from his grasp as respectfully as possible.  “My husband will be here soon and he would not appreciate my sharing of favors he considers his own,” she said tactfully as she worked to keep him at a distance.

“Not even for his, King?  Surely he would consider it an honor to have me bed his wife?”

“Ours is a love match, majesty.  It would grieve him sorely for anyone to know my touch but him.”

“A love match?” the King asked, somehow managing to sound both contemptuous and filled with envy at the same time.  “Is there such a thing, truly?” Sookie nodded, holding her head high.  Eric noticed then that her hair was braided with gold cord and her dress was the color of the Greek sea, a strong compliment to her pink rouge.

“Truly, we met as children.  He had has held my heart since that day.”

“And you his?”  She hesitated, her face showing so much at once that the King took the chance to move closer, perhaps sensing a victory in that her husband not truly caring for her.  Eric moved closer to her and leaned down to whisper in her ear.

“My heart has always, always been yours.  Only you, Sookie.”  She smiled a little and he hoped she heard him.  A moment later he was sure she had.

“Yes, his heart has always been mine a well.”  She looked so confident in his love that she glowed in the candle light of what was presumably the King’s own chamber.  Unfortunately, this only made her more desirable.

“And if I cared nothing for your heart or his and insisted on your body for my pleasure tonight?” She inclined her head gracefully, her eyes going to the floor but not before Eric had seen the suppressed fury in their depths.

“Tell me, what do they say of Minos?”   Her head still down, she went on distracting him with tales of his own glory.  He watched until the dream faded and daylight called him back.  Oh, Sookie, I wish I had come with you to Greece.  I wish things could have been different for us, too.

All day, pressed by his dream of Minos’ efforts to seduce Sookie, Eric roamed the ruins if the dig site.  Praying, thinking, talking to himself, promising anything and everything to whoever could show him the way to her side.  By the time that dark came despair had taken hold leaving him on the verge of tears or wanting to punch something.  Hard.

He felt as though he was so close to her, yet how could that be?  The doubts he had controlled came back with a vengeance pressing in and causing him to wonder if indeed has lost himself to madness.

He looked up at the full moon and whispered a last prayer, “Please.”  The breeze disturbed his hair when she appeared before him.  Her hair was white and thin, her gaze a piercing milky white.  Her grip was cold icy steel, and in the bright moonlight he could see that her only teeth were two long incisors.  Two fangs.

“We meet again, Viking,” she whispered as she bit into his long neck, moaning in pleasure as his blood washed over her tongue.  Vampires are real! Eric thought as blackness closed his eyes. He was too excited to be afraid.