The Big Bang- A Field Full of Flowers

She was still asleep beside him when he rose for the night.  He had loved her until dawn, using all his experience and expertise to satisfy her body’s demands without actually giving her what she wanted.  What he actually wanted.

He was tired, he never felt tired.  It was not possible for him to feel tired, but he felt that way none the less.  He knew it was the weight of the decision that he had made for both of them that was wearing on him.  Over and over she had begged him, and each time he had redoubled his efforts, employed his best techniques to satisfy her, but in between her countless orgasms as he worked her through the wave she would beg him, crying and sobbing in her frustration to feel him moving inside her, filling her.

Over and over he had spilt his seed outside the warmth and heat of her that he longed to feel around him again.  Forcing himself to shut out her pleas and cries he focused on the feelings that flooded the bond and worked from one orgasm to the next until she had succumbed to exhaustion just before dawn.

It had been the longest and most painful night that he could remember having in a long time.

What if she hates you for taking this chance from her?  He knew that she loved him, perhaps if she had known this was a possibility and they had been able to discuss it before the mating had begun her answer would have been different.

What if you do this and have her hate you anyway because this is just you trying to find a way to justify your own selfish needs?

He showered quickly and went outside to do a quick perimeter check and gather wood to build another fire.  He felt her waken but she did not call to him as she had the night before.  I guess that means we are at low tide for now, he thought hurrying none the less, not wanting her to be alone in case she needed him.

He found her in the kitchen making tea.  She came to him immediately and he dropped the wood to take her in his arms.  She hugged him tightly, “I’m so sorry, Eric.  If I had known we would have discussed it before coming here, I swear it!”  He rubbed her back soothingly and kissed the top of her head.  “Why didn’t you tell me that you wanted a child with me before?” she asked his chest, still not looking him in the eye.

“It’s best not to speak of the impossible,” came his soft answer.  She held on tighter.

“I wish you had told me.  I wish we could have talked about it when my head was straight.”  Her frustration was clear but it was not aimed at him, just at this incredibly fucked up situation they now found themselves in.  “I want this, I want it with every fiber of my being, but…I’m SUPPOSED to want that now.  I have no way of knowing if it’s what I really want or what my body is convincing me I want, and by the time I can think straight enough to know, our chance will have passed.”

He picked up and carried her into the living room, settling on the sofa with her in his lap sideways so that she could rest her head on his chest. “What do you want, Eric?”  He sighed.

“The bond we share ties me to your body so I am responding to your needs almost as much as you are, but it has been my secret wish almost since the day we met.” She gasped softly at his words.  “The night of the gala on my second night in Oklahoma was the first time I saw that image that you picked up from me.”

“But you have seen it over and over since then?”

“Yes,” he whispered, holding her closer.  “And the night of the Were  fight when we made love in the field I had a dream…a vision of some kind that you were pregnant.”  He stopped then, not wanting to share the end of that and upset her.  If all that came to pass he would find a way to make sure she and the child were safe.  The Ancient Pythoness had promised to tell him how when next they met in his vision.

“Sookie, why did you pick this place to come to now?”  She shrugged.

“Lots of reasons.  The connection to Fintan, the remote rural location.  I have always loved this place.”  She sighed then.

“You knew we were coming here over a month ago, which was slightly before we met, when you had the room made light tight for me.  How did you know?”

If he had needed to breathe he would have been holding his breath to see if she said what he was pretty sure she was about to say.

“Pythia suggested it,” she said softly, turning deeper into his embrace, starting to nuzzle his neck.  He could feel her lust starting to rise slowly as her hands caressed his neck and she moved suggestively in his lap.

Pythia had told him four hundred years ago to go west until he found his sun.  Pythia had told him in his vision that he needed to ask her when they met again, how to save Sookie and his child from the darkness.  Pythia was of his bloodline.  Pythia suggested they come here.

“Sookie,” he pulled back to look at her, “you trust Pythia, right?”

“Do you trust me to make this decision for us now?”  She nodded.

“The only person I trust more than Pythia is you, Eric.  You’re all I have left now.” Her words were slow and sad and his heart broke for her.  She had lost so much recently and now there was this.  They had been viewing it as a necessary evil, but perhaps it was a gift in disguise, an opportunity.

Oh, but what a chance!  A chance to see Sookie and their daughter running through that field of flowers in the bright yellow sunshine!  There are so many risks, his mind told him trying to be rational in the face of all this hope and joy that was flooding his system.

How will you protect them?  How will you keep them safe in the middle of a supernatural war that will decide the fate of the very world itself?

Since when did you become so afraid of losing something that you won’t even try to have it?

As his mind raced to connect the dots and question what he was thinking, Sookie slid the robe she had been wearing of her shoulders and wrapped her knees around his hips.  She was grinding herself against his erection that she could feel beneath her bottom, and her rising lust was slowly tipping his intellect out and taking control.

“Need you,” she whispered, rocking harder against him.  He moaned and kissed her as his hips rocked in response, the last glimmer of doubt leaving his mind.  “Need you,” she said again, throwing her head back and rocking harder on him.  His hand slipped down and found her pleasure center, rubbing her at vampire speeds she came on his hand less than a minute later, crying out his name in an unending litany before falling into him.

He knew he had a couple of minutes before she would revive and need him again.  He moved them outside swiftly and to the spot that had lit up the night before.  As soon as he placed her feet on the ground, the light returned, shining bright and moving up her body in soft wispy tendrils.  He watched it as he removed her robe and spread it out on the ground beside them.  He removed his own clothes and stood before her waiting.  She looked up at him with love and lust in her eyes and pulled him to her, her hands on his either side of long graceful neck.  Down and down she pulled him until she covered the robe and he covered her.

The tendrils of light wound up from his feet to his long sculpted legs, and he felt the electric sensation that he had experience the night before centered in his lower back and middle, making him leak in anticipation. The intensity made him hiss, and rather than wait she reached between them and lined him up with her entrance thrusting herself onto him, feeling whole at long last.

This was what she had needed so desperately last night.  From the moment he sank into her hot welcoming channel she started to spasm, her pleasure overload telegraphing to him forcing him over the edge before he even moved.  The intensity of his release increased immeasurably by the light winding around them both now, growing bright and pulsing in time with the waves of desire that moved between them in the bond.  Still rock hard, he started to thrust and felt the warmth inside her increase, as though the friction of their bodies was starting a fire.

She called his name again, as he moved in her.  “I’m right here,” he told her, thrusting harder so she could feel him.  Her head rolled to the side offering him her neck and he moaned, falling into the curve of her shoulder.  “I will if you will,” he told her and she nodded, her eyes closed as she tried to process and contain everything that was sweeping through her.  “Look at me, Sookie” he commanded to her.

“No, no I can’t,” she moaned twisting her head further away.

“Look at me!” he whispered fiercely.  Her eyes popped open and she gasped as she felt another connection between them pop into existence.  Letting it all go she dived into his mind and heard her name over and over.

She groaned and raised her legs higher on his back, falling further into him, they folded themselves and each other until there was only being there.

“Love you, too,” she told him raising her hips to meet his every thrust never wanting to be apart from him again.  Pushing even deeper he broke eye contact and buried his face in her neck.

“You’re sure,” he asked her knowing that it would kill him if she said no.

“YES! YES!” She called out over and over as he bit her and a second later he felt her fangs slide into his neck as well.  That was when he exploded inside her, grunting as he lapped the blood from her neck and trying to get closer.  It was an urge that no action could fully satisfy.  A second later she came hard around him, and moaned in his neck, sucking him with her mouth and the hot tight muscles of her slick channel.

She took everything he had into her and gave him everything she was in return.  For just a moment he could see her thoughts in the light bond they had forged.   It was a collage of his face in moments from the time they had met right up to now held together by the overwhelming sense of love that he felt from her.

He collapsed on top of her and felt her arms embrace  him, pulling him closer still.  Neither of them spoke but they were both thinking of the same little blonde girl in field full of flowers under a bright yellow sun, and they felt more at peace than they ever had before in their long lives. 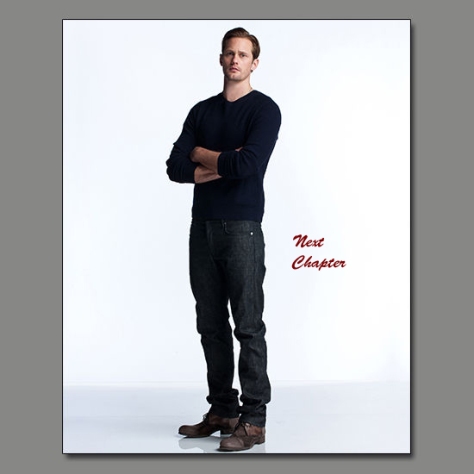 9 thoughts on “A Field Full of Flowers”